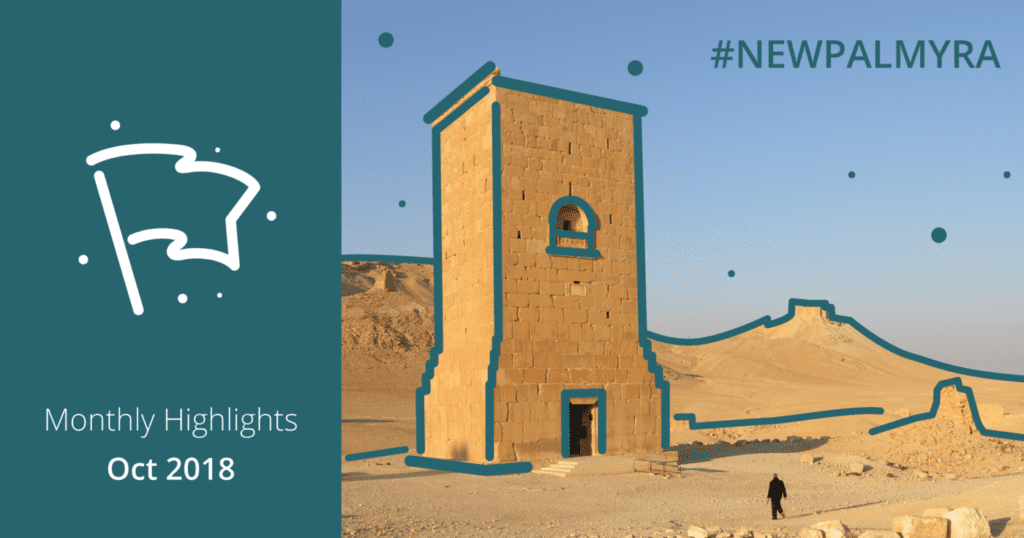 The foundation has organized the fifth “Reinventing the Like” campaign in October, and for the first time provided rewards for readers to stimulate registration. This is a temporary cure before the permanent solution, a simplified registration process, is released in November.

The Foundation has secured an investment on LikeCoin from and established a strategic collaboration with Animoca Brands. Animoca Brands is a renowned game developer and publisher. Listed in Australia with the ticker AB1, Animoca Brands has in recent years engaged in the rapid development of blockchain by, for example, investing in Cryptokittes publisher Dapper Labs and publishing Cryptokittes in China, Hong Kong and Taiwan.

The purpose of #NEWPALMYRA is an effort to reconstruct the ancient city of Palmyra in Syria, which was destroyed by ISIS, in virtual space. Digital tools are used to preserve heritage sites. #NEWPALMYRA ties together artists, architects, archaeologists, researchers and others to uncover evidence, rebuild ruins, create new artworks, and encourage the display of cultural influence through the lens of constructions and buildings by cooperation with museum and exhibitions around the world.

The LikeCoin Foundation appreciates and supports #NEWPALMYRA. From October and for twelve months, a monthly reward of LikeCoin will be given to the creators of 3D models and other artworks of Palmyra. The subjects of October and November are the Temple of Al-lat and the Tower of Elahbel respectively.

In October the LikeCoin Foundation held the fifth “Reinventing the Like” campaign. In order to encourage readers to register for a LikeCoin ID, LikeCoin was gifted to participating readers for the first time. A total of 565 creators and 593 registered readers have participated, showing a growth of 29% and 72% respectively from the previous campaign.

However, even when registration is incentivized, data shows 2/3 of the users who started registration didn’t complete the process, reconfirming the registration experience being too complicated for layman. As such, the team has spent a month to simplify the flow, allowing registration of LikeCoin to be done in a minute, regardless of computer or mobile.

The change also solves the current platform support issue and allows Safari and mobile browsers to log in, so that users can Like creative contents from various platforms.

Following the simplified registration process, mandatory login will be enforced before Liking creative contents. It helps combat Like spamming and make crowd-judging a fair process.

The internal preview of LikeChain has been on going in October. The preview includes four fundamental features: registration, transfer, deposit and withdrawal. Over the last month three nodes were added to LikeChain, and the team plans to kick off the first security audit on the LikeChain by December. If you are interested in becoming one of the first batch of nodes of LikeChain, please contact us by November 23.

LikeChain is completely open-source. Codes and documents are available on Github for interested developers.

The plugin has been updated to 1.1.4 to stay compatible with the upcoming WordPress 5.0. Testing are being done to ensure compatibility with the latest WordPress changes, notably the all new block-based editor Gutenberg.

Due to the development of bottom layer of the LikeChain and the simplification of the registration process, the front end of puttyimages and oice was not updated.

For the past 6 months, the LikeCoin community has not only grown in numbers but also become more active and passionate. It is especially obvious in October, with more articles on LikeCoin written by community than by the core team: