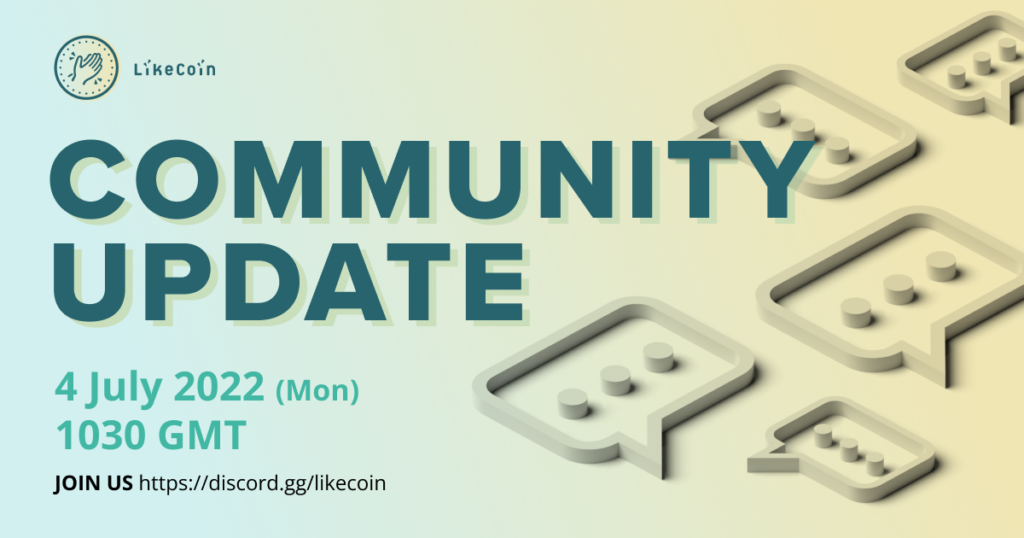 LikeCoin chan will be preparing for the upcoming major upgrade “StarFerry” in this month and next.

StarFerry will be the next LikeCoin chain code name and it will include the long awaited NFT module, validators please take note of that. Currently there is already an upgrade proposal for v3.0.0 on testnet on testnet which is using the Cosmos SDK 0.45.6. If the validator already has Cosmovisor from the last upgrade, it should happen automatically. More blog post and technical documents will be released in upcoming weeks. The upgrade and testing will last for about two weeks and the mainnet upgrade will happen on July week 3 if everything goes smooth in the testnet. All related discussion at this stage on testnet will be on the testnet Discord channel.

Preparing for a new Liker Land homepage about the writing NFT feature presented last month, the new design will be rolled out by this month, all the details about Writing NFT will be in there. It will also be the home of the campaign once the writing NFT launch.

It was scheduled to be finished last month but there is some delay as the developer who is responsible for it has been moved to chain development as well. dap will be launched within this month to replace the current dao.like.co. It is not perfect but should be good enough to replace the old dao.like.co. Will probably provide another link just in case users have to access the old version before the new version gets stabilized. The demo is in https://dao-staging.testnet.like.co/.

The LIKE was spending faster than expected because of the drop of market price. The 20,000,000 LIKE from proposal 47 was finished within 6.5 weeks, on average spending 3.3 million LikeCoin in a week. With the latest token price for this week is actually 4 million LikeCoin. Reach consent with Oursky to cut one of the developers from our project so there is one developer since July, in order to save the budget, to minimize and lower the impact of token price. Moreover the chain upgrade is reaching major progress and will have to wait for Cosmos SDK 0.46, therefore will cut one developer and have him to take care of both the chain and dao.like.co, with the priority on the chain side.

The fund from the Tech SubDAO has finished already and a 40,000 HKD account payable to Oursky so another proposal for 20,000,000 LIKE has to be raised. As one headcount was cutted, the budget will last longer and estimated to be 8-10weeks if the token price stays as it is now. Hope the community can understand although it seems like Tech SubDAO is spending LikeCoin much faster than before, but the spending is cautious and meaningful, feel free to check out the progress report and the bookkeeping the Google spreadsheet.

depub.space is Dapp build on top of the LikeCoin chain, is a decentralized twitter and really focus on making the no.1 place for #Cosmosnews over the next few weeks. Encourage you to bookmark #Cosmosnews and go there 1st thing in the day and get an idea of what is happening in the Cosmos Ecosystem. depub.space got very good SEO traffic for the different things that it posted about, encouraging everyone to contribute if there is news in the Cosmos Ecosystem.

Future roadmap plans include expanding wallet partnership, expanding different integration, expanding the community and user base. Initially depub.space has worked in partnership with Omniflix to support their profile picture NFT, Stargaze integration is about to roll out soon, Cosmostation wallet integration pushed out, still trying to get Cosmosation and Keplr to list LikeCoin as official chain. On the marketing side, during Dcentral in Austin perception around the blockchain community about LikeCoin is positive, people have respect for LikeCoin and are familiar with it with no negative perception, but there is a lot of room to grow. People are aware of LikeCoin, they have heard of it but they are not familiar with a lot of the details, not really familiar with the background and the community passion around creativity, open source and creative commons. As the project growth, should be able to education people in the US and western Europe of the work that are doing with LikeCoin. Several marketing tests have to be done to figure out what is going to drive usage. A couple of influencers joined the platform: Chapman To has started using depub.space and will start featuring more. More traffic to the site base on social media sharing and the blog post, Other than the integration, also working on fund raising to try to get resources to speed up development and get more people to the team.

Depub can now support Twitter feature, when you post something on depub, you can directly post it on Twitter as well. It is very convenient if you are a daily Twitter user, you can have the tweet backup in the LikeCoin chain as well. If you tweet and spend time developing your community on Twitter, you don’t own your content, Twitter can take your account and suspend it, numerous things can happen to it and all the sudden all the words that you’ve written just disappear. And if you tweet them through depub, all your content will be on depub.space also. You decentralize your social media and take away control from Twitter and take ownership of your work. And currently there is a campaign where you can mint free NFT from Omniflix. The #Cosmosnews campaign will definitely help a lot to let the Cosmos Ecosystem to learn about us while we help them curate content about important updates of Cosmos.

In terms of depub features, going to push out in the next couple of months integration that supports the LikeCoin upgrade, you can “LIKE” a post on depub.

Similar to depub.space, there is another Dapp Liker.Social. It also has a Like and Share feature and it also functions like Twitter. If you are a Chinese user and interact more with other Likers, it is the perfect place for you.