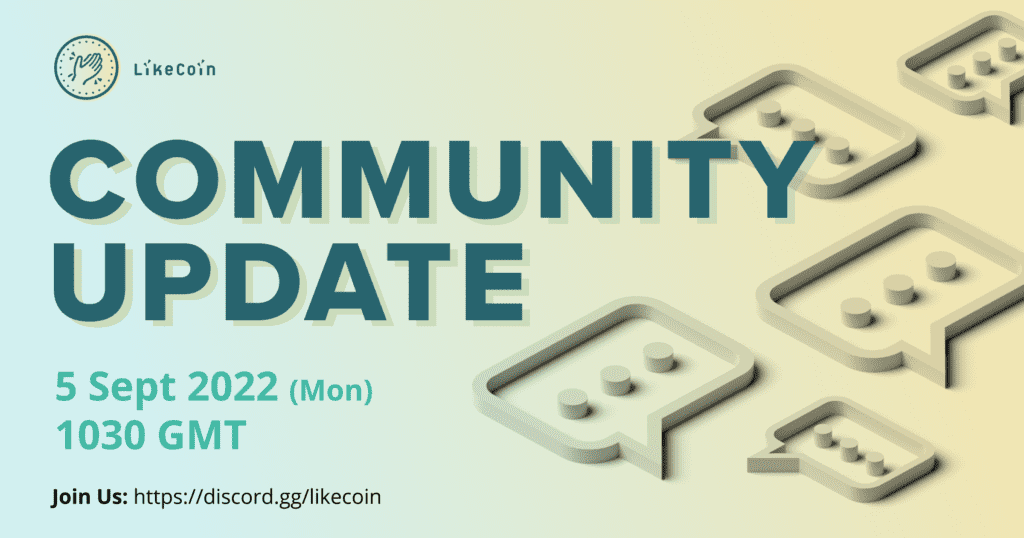 Progress of Writing NFT, LikeCoin will be on Mintscan and Cosmostation!

If you visit Liker.Land you will see a new website mainly about Writing NFT and you can also see a campaign page that currently demonstrates different kinds of Writing NFT.

In the previous month 5 Writing NFT demo cases were listed, from which majority of them are existing community members including kin, Blocktrend, To Cheung book preface on Writing NFT. The previous one from last week was from a KOL in Hong Kong who is Pazu. He is a micro influencer on Facebook mostly and he minted his column on Standnews previously as an NFT. There were a total of 5 writing NFT demo cases released last month. The purpose of the demo cases is to demonstrate the usefulness of Writing NFT, how all the features should be included into the flow from reader’s perspective and also the feature of dynamic pricing.

Transfer feature is enabled, reader can transfer the Writing NFT as well.

In terms of marketing strategy, Discord event and AMA event with writers were conducted last month. The demo cases is to demonstrate the feature of Writing NFT but the most important part is to have writers to share about their thought on Writing NFT and how they can use the tool to build around their readers community and potentially how they can build a business model around public content or in terms of general writing content that they have.

Among the 5 Writing NFT demo cases, 4 AMAs that were happening in the previous month. The majority of them are writers from Hong Kong and Taiwan. Cantonese, Mandarin, English AMA will be conducted so that different community members would be able to talk to and interact with writers that they are familiar with. The previous AMA was a great success, not only to create more engagement with the LikeCoin Discord community, but also share the thoughts about the new innovation tool. It is really helpful to learn about what is the product market for writers and what are the readers’ obstacles and challenges when they want to participate in Writing NFT.

In terms of roadmap, among the 5 Writing NFT demo cases, closely monitoring and improving the onboarding experiences for readers. This month will slow down writing NFT demo casese per week.  Will turn the frequency maybe about 2 weeks per one in release, so that the onboarding experiences can be improved. A lot of the target users don’t really have LIKE tokens to facilitate the purchase of Writing NFT. It is something to be solved and improved. Payment solutions other than purely token, service providers like Stipe are being looked into so that readers and users will be able to purchase Writing NFT with credit card. It is more approaching for readers or users who have never used blockchain or $LIKE before.

Educate writers about how they are mint Writing NFT using the WordPress plugin, starting with the whitelisted community. Dropin session will be launched next week for whitelisted communities and writers who show interests in adopting writing NFt and make successful use cases. Interested parties can sign up later on.

Also start gathering data in terms of users boarding flow, when to start A/B testing and also improve the whole product in general. In the next few months users feedback is extremely important, please feel free to share your thoughts on Discord.

The exchange and block explorer status

Persuade integration with Mintscan and Cosmostation

Mintscan has already integrated LikeCoin on their block explorer services. It will be available after the Comsmostation validator node has been set up. Mintscan will be on board as a validator in terms of the LikeCoin chain.  This is very exciting news, talking with them for several months now and being able to have a major breakthrough with this partner on board. Minstscan is growing very fast and rapidly as an interchain wallet, not only able to check on Cosmos but also BSC and other chains and protocols. It will be much more convenient for LIKE holders and also a great public exposure on marketing as a lot of people are using Mintscan already and they are able to see LIKE as an asset in their wallet interface. More exposure in terms of search among other top tokens. Please delegate and support Mintscan as an appreciation to their work.

This is a top priority to work towards but this kind of partnership and inquiries take time especially with a tight budget, but it is important in terms of liquidity. This is already a known priority. Use DEX as a trading solution right now. There are several exchanges that have some issues lately, e.g. Liquid is acquired by FTX. FTX is in touch right now to talk about possibilities. Liquid unlisting trading pair was among all other major tokens, not only LIKE. Also discussing with a lot of exchange partners right now.

Core developer and micro influencer Jack Zampolin is willing to help to promote. Last two week were fruitful to bring exposure to LikeCoin and towards the Cosmos community.  If there is enough time to promote, should be able to have the proposal for external match incentives. Suggest to raise another proposal to match the external incentives.

CDC needs to review the committee term of the year. discussion is up in  #apply-for-delegation channel.

Phoebe’s Trip in the US

DWeb Camp hosted by Internet Archive, 400 people attend the events and Phoebe’s host a lightning talk regarding decentralized publishing. Also able to meet Starling Lab, one of the major partners in the US, working towards content authenticity and preservation. Previously worked with them regarding filing a war crime record that was submitted to the international court and LikeConi was one of the registered chains as a use case. It was a huge milestone and was highly highlighted in the event and conference, gaining a lot of exposure. A lot of funding opportunities as well and was able to present an update to the Protocol Lab while the founder was there. Internet Archive is also aware of what LikeCoin is doing. It was a great opportunity to show what LikeCoin has been doing in Asia and also the resources available in the US. LikeCoin is invited to speak at an IPFS event in Singapore towards the end of this month and also the Lisbon event around IPFS use case in October. Phoebe also attended the Stanford blockchain conference, meeting a lot of Cosmos people.