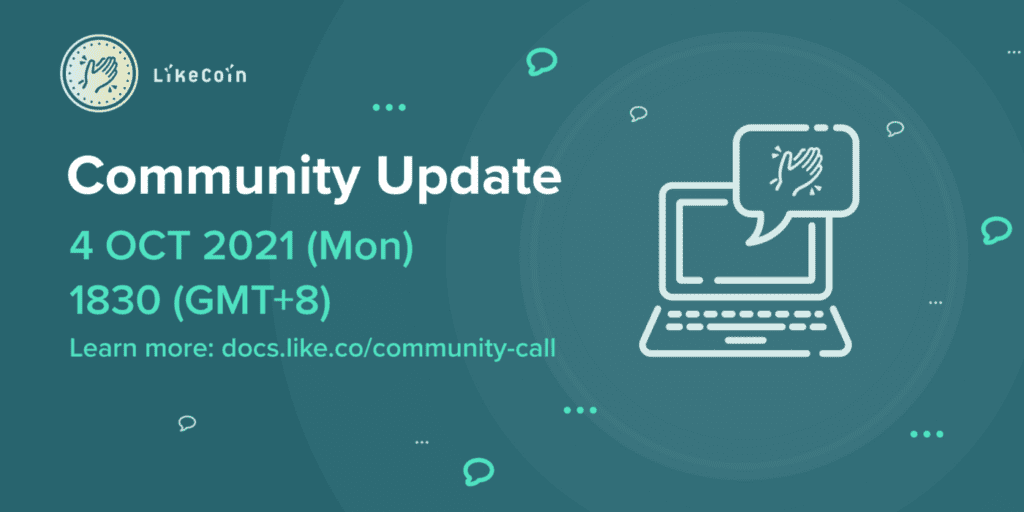 Proposal 17 enables IBC on Mainnet is now in the voting period which is expected to deepen the liquidity of LIKE. And enable LIKE to connect with other IBC-enabled chains in Cosmos. Here’s the recap of the LikeCoin Community Call on 2021.10.04 (Mon) and find out more about the new opportunities coming ahead.

Proposal #17 enables #IBC on Mainnet is entering the voting period. Currently the vote is enough for it to pass but validators and stakeholders are encouraged to participate in the governance and vote. This is a parameter change proposal and will enable the IBC transfer module which is already in the LikeCoin chain software. IBC can connect LikeCoin chain and other chains like the Cosmos Hub and Osmosis chain, tokens can be transferred between IBC connected chains. LIKE can be sent to other Defi platforms and facilitate trading.

Different implementations of the relayer were being tested in the past few weeks. Relayer is software to monitor the IBC transfers on connected chains and then proxy and relay these messages to other chains in order to make IBC transfers and IBC messages possible. Go implementation, typescript and rust implementation were also being tested, it seems that the typescript implementation is more suitable for production usage, the other two are not very stable. Currently, the public test net is already connected to Cosmos Hub and the relayer stability is being monitored. After proposal 17 is passed, the mainnet will be connected to Cosmos Hub and Osmosis so that LikeCoin can be transferred to these chains. relayer will also be run between these chains.

👓Have a read: How to direct vote on the proposal

Dex in the Cosmos ecosystem is being reviewed and one or some of them will be selected for participation, active Cosmos users are welcomed to share their opinion on Discord regarding the selection.

LikeCoin is now a validator on Cosmos to test IBC transactions and relayer, and also a validator on Desmos which is a social media project running by the Foroble team and exploring the chance to add it as a social profile for Liker Land in the future.

As of today, there is about 420k ISCN registration. The usage was from both ISCN batch uploader and also app.like.co. There is also a new LikeCoin grantee project DDShare from IPFSpace that is also helping the community register ISCN. KPI such as ISCN number as well as ISCN wallet number will be the main focus in Q4 in terms of product development.

Had a call last week with Arweave about joining the Open Web Foundry which is one of the incubator programmes that will start in the last week of October. LikeCoin will participate in their community demo as well as their incubation program, and will also have some kind of grant that can be leveraged to provide to our own grantee if they have to plan to integrate with Arweave as well. Further discussion with the Arweave team will be conducted before any subsidy or grants in terms of AR.

Proposal 16 already passed regarding token swap with Numbers Protocol. As they are organizing a token sale, will discuss again with them how the token swap will be executed in Q4.

16 proposals received, reviewed 13 of them and distributed has exceeded 1 million LIKE and target the number to be at least 1.5 million by the end of this month.

ISCN Rock & Roll is the new campaign including two sub-tacks: tool making and content creation so that it’s designed for both developers and non-developers or LikeCoin enthusiasts.

As LikeCoin is a DAO, anyone can actually propose their proposals for airdrop and try to convince the community to approve it. Two airdrops are being drafted, one targeted at ATOM and Osmo holders and the other one is to honor the Civic Liker which have been contributing their fiat currency to the community and to support the creators. Everyone has their right to raise the proposal regarding how to use the public pool for air drops or other purposes.

Listing on DEX is the same logic, it’s also a DAO. It’s actually permissionless meaning that can be done by anyone as long as they create the liquidity pool in Osmosis or Emeris. Once proposal 17 passed, anyone can create their liquidity pool for LIKE and ATOM without gaining permission from the community.

It is recommended that the community add the liquidity to their LIKE/ATOM and LIKE/OSMO to the liquidity pool and earn the trading fee in the future.

Liquid decreased their withdrawal fee for LIKE last week.