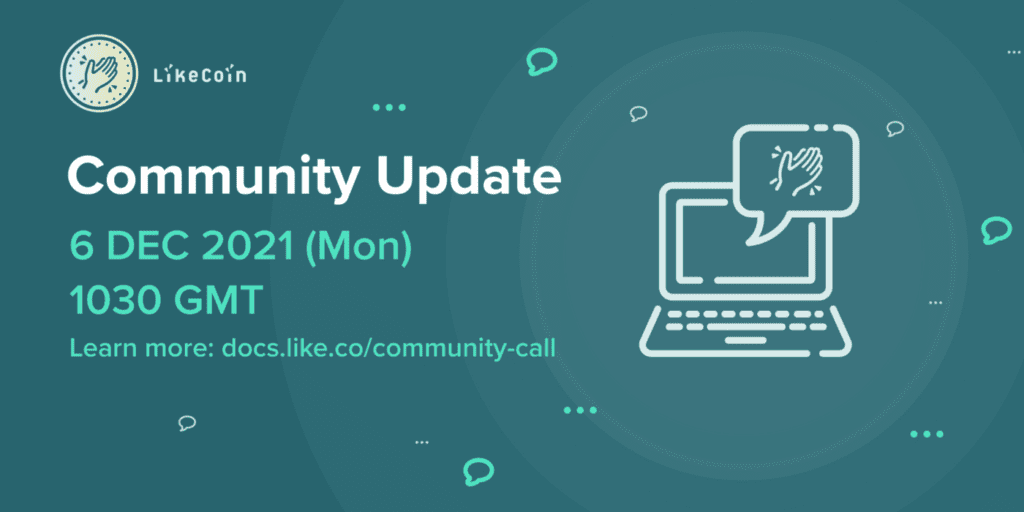 In the 2021 last community call of LikeCoin, things are happening in the ecosystem including the airdrop that everybody is awaiting for, updates on DEX, promotion plan for Twitter, proposals passed and upcoming, update on Grants and much more.

The airdrop primarily are for ATOM and OSMO holders which focus on the crypto community. The latest snapshot was taken on November 30, 2021 and the dev team is working on the front-end development for how to claim and what are the missions that includes, etc. An airdrop claim website is available for checking eligibility before Christmas, simply paste the wallet address to check on it. Airdrop proposal 25 is on voting period now to approve the budget. Marketers or people who are in the crypto community that have experience with airdrop please help spread the news because it is a great chance for LikeCoin to get in touch with other projects or protocols or communities around the crypto community.

LikeCoin is listed on Osmosis and Emeris. There are two incentivized pools on Osmosis which are LIKE/OSMO and LIKE/ATOM. Liker Land team is tracking on the total value locked (TVL) and working on the effort to enhance LIKE trading volume. The current Osmosis pool data can be found on https://info.osmosis.zone/pool/555 and https://info.osmosis.zone/pool/553.

Wrapped up the work with Arweave Open Web Foundry 5 as a participant of the program but in terms of development more arweave integration will be rolling up including the upgraded WordPress plugin that will be available to the public very soon. WordPress users can directly upload their content to Arweave and IPFS, etc in the next version of the update.It would be a very nice stemless UI and prototype demo can be found in the presentation in Open Web Foundry 5.

Kin and Phoebe will follow up on the passed proposal 16 on the Numbers Protocol Token Swap. That would be a community asset, actually and basically the first proposal to swap some token for the community to use or to hold. Numbers Protocol are doing great lately, feel free to follow them on twitter on their development.

On the product side LikeCoin is catching up to see what’s the next step to integrate ISCN to their capture app which is a mobile app you can take pictures instantly and upload your metadata to blockchain.

Tiarnan and his team are helping to ramp up more contents, more updates and campaigns for growing the community on& LikeCoin Twitter. Tiarnan worked on Twitter growth for LikeCoin for two and a half months. He started his crypto journey in 2016 in Hong Kong, worked for several companies and has a marketing and advertising background in the traditional alcohol industry. He uses both his crypto experience and also advertising experience to help LikeCoin out.

Started right before the IBC hype during September October, impression and engagement rate has a pretty substantial increase. Categorized the type of tweets and reviewed what kind of tweets gave good engagement and impression. He will do a quarterly wrap up report for the community to review. For the 1st month posts regarding Osmosis and Emeris Dex got a very good engagement rate. The map of zones tweets are viral. In the 2nd month impressions dropped a little bit and it was still doing good. Outreach to the WordPress community will be focused on the coming month. The report is on the 20th of the month.

A proposal to compensate Tiarnan and his team for their work on paying LIKE, it will be the 1st proposal to hire and on board a team and It will be a great chance to experience the whole thing.

Another proposal will be raised to get a budget of 50 million LikeCoin for the airdrop which is done by proposal 25 in the voting period now. After the proposal is passed the 50 million LIKE will be sent to a dedicated wallet for their airdrop automatically.

A proposal will be raised to transfer a 100 million LIKE to the multisig wallet of the community delegation committee. The multisig wallet was created on December 7 by the 7 community delegation committee members; which can only trigger transactions with 4 people signing and a proposal will be raised to transfer the funds to the CDC.to further delegate to the validators. There were 3 public pools Kin holding on the behalf of the community which was the ecosystem pool and it is now zero and outdated. There are still two which are migration pool and team pool, which will undelegate tokens from these two pools from the validators and raise another proposal to transfer all of them to the community pool. After these exercises and actions, there will be no public assets held by Kin or anyone on behalf of the community.

Thanks for the help from 寶博士（dAb）葛如鈞 and Haggen and also Greg So who’s the founder of One Sky, they will be holding a multisig wallet to hold the NUM ERC-20 asset from proposal 16. A new proposal will also be raised to endorse 3 of them to hold assets.

After all these are done, LikeCoin will be fully decentralized. Anyone can raise a proposal and if you have enough approval from the community you can use a certain fund that is in the community pool by community pool spend proposal which can be sent to any LikeCoin wallet, or to the working committee multisig wallet for them to delegate or spend as petty cash.

Since May this is the 1st version of the LikeCoin Grants was launched. Due to a number of considerations, LikeCoin Grants is temporarily paused on taking new applications and will reorganize the whole program to fit the decentralization of the governance body on the LikeCoin chain. The selection and appointment of the executive body, including the co-ordinator and the committee, and the mechanisms related, will be re-designed as well. All the existing applications and on-going projects are not affected. A brand new version LikeCoin Grants 2.0 is expected to be back in January 2022 by proposal voting.

Dec 11–12 was the WordCamp Taiwan 2021 sponsor which help to better reach out the WordPress community and support their open source effort. The event was online with virtual booths and mini events.

There were a few submissions and the result will be shared later on.

On December 15 there will be a meetup in Hong Kong, feel free to join us if you are around, details are on Discord.