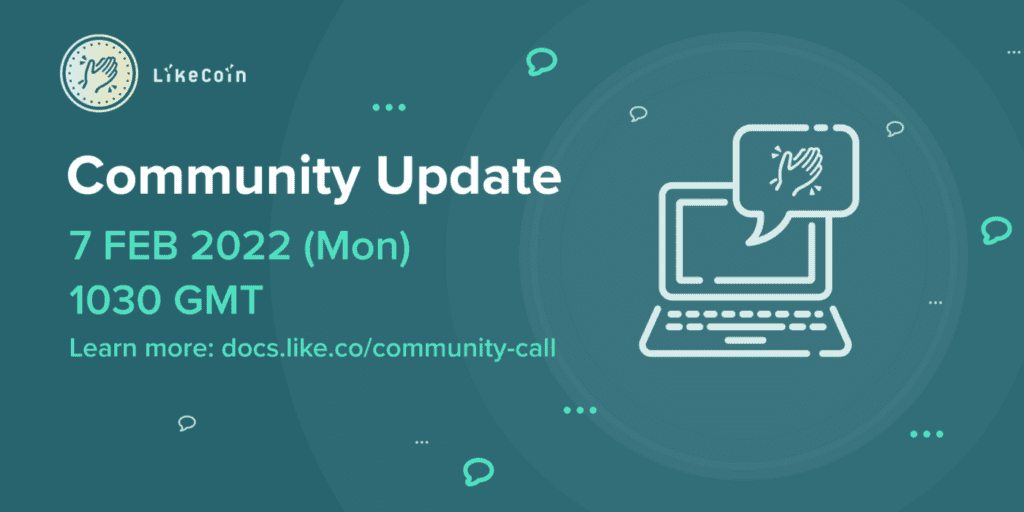 The 1st community meeting for the year of Tiger, Happy Chinese New Year!

The date of dirdrop claim will happen on Feb 21, the information will outreach to the communities in the next two weeks.

Launched Twitter influencer campaign for those who did not qualify for the airdrop with Twitter handle @CosmosEcosystem, and will also work with other KOLs within the Cosmos Twitter space. The airdrop news can ripple through Twitter, being capitalized and get some more new people coming into LikeCoin. Perhaps they weren’t eligible for the airdrop but could still add value to the community. Bonus will be given to participants if they are converted into depub.SPACE.

Starname is a personalized identify in the blockchain world, come and claim your *LIKE domain starting on Feb 8.

Atogail Forests is an ecosystem restoration and carbon credit related NFT project, the NFT will be able to generate some carbon credits which means taking carbon dioxide from the air and can sell it as real value to polluting companies. The campaign will reserve white list for the LikeCoin community and Atogail will have ecological reporting based on the land that they are going to be using for their project and they will post that information into ISCN, their NFT potentially will also have a lot of metadata e.g. How much carbon they’ve sequestered. Atogail Forests will explore with LikeCoin to see how they can potentially use LikeCoin for that metadata.

On depub.SPACE, users can connect to Desmos Profile. Will reach out to Desmos Network for co-marketing campaigns and lower the entry barrier for people to use $LIKE and $DSM.

More operational details including petty cash proposal for execution on giveaway campaign and the semi-auto payout proposal to Irtysh Digital (Jan-Mar) can be found and discussed on LikeCoin Discord #marketing channel. If anyone wants to be a part of the marketing working group please do raise hand in the Discord channel.

WordPress Plugin version 2.5 new feature of native support for the new Getunburg post editor is ready and will have a revamped user experience for publishing to DePub and ISCN easily. The auto publishing to Matter is still there and will support more platforms in the future e.g. Medium. The plugin is under testing and is ready on the WordPress repository and can be tested out with advance setting.

Civic Liker will evolve to a Web3 version, it is a movement to reward creators by clicking on the widely adopted LikeCoin button. Readers distribute their LikeCoin budget by giving Likes (clap) and also vote on the distribution of the public fund called “Creators Fund”. The old Civic Liker scheme has been running for three years which allows readers to subscribe to a monthly plan by their credit cards. The game rule is going to change so that the user does not need to donate by fiat money but by staking LikeCoin. In the new scheme supporters can distribute their stake rewards by giving Likes. Subscriber can delegate their LikeCoin to a specific Civic Liker node. This note will have a high commission rate e.g. 100% and all these commissions will be used for rewarding the creators. New Civic Liker registration has been stopped on February 4. The tentative launch day for this Web3 version of Civic Liker is Feb 21, which is the same date that LikeCoin Airdrop begins. Some Civic Likers will be interested to delegate their LikeCoin that they get in the Airdrop and continue to become a Civic Liker. More details to follow.

Liker Land is up as a validator in Osmosis, the reasons are for testing IBC related stuff and a valuable experience to expose to the Cosmos community. Part of the rewards that gained from the node will be contributed back to the LikeCoin community as well. Feel free to delegate your $OSMO to Liker Land.

Setting up the automated pipelines for building the binaries and the NFT module, and will work on the wallet prefix changes, implementing a custom solution to use both cosmos1 and like1 wallet addresses to sign and transfer transactions. Next month will focus on testnet setup.

Objectives: Decide the amount of budget to be released to creators daily based on Civic Likers’ contribution.

LikeCoin Grants wrapped up last year and supposedly another proposal will be raised to continue the journey. The initial thought is to make some changes to narrow down the scope. Previously the LikeCoin Grants was for approving budget for product development, marketing and archive content but it is to bold for committee member to approve on everything therefore it will be narrow down to a tech sub-DAO which only focus on funding technical development of LikeCoin chain and leave other elements such as marketing and content preservation and content creation to other sub-DAO. The new structure will be proposed to the community within the month.

Liker Land is hiring for tech and non-technical roles.

Beside depub.SPACE, Snappblock is also avaialble from the LikeCoin Grants, feel free to check them out and play around with.