What is Civic Liker 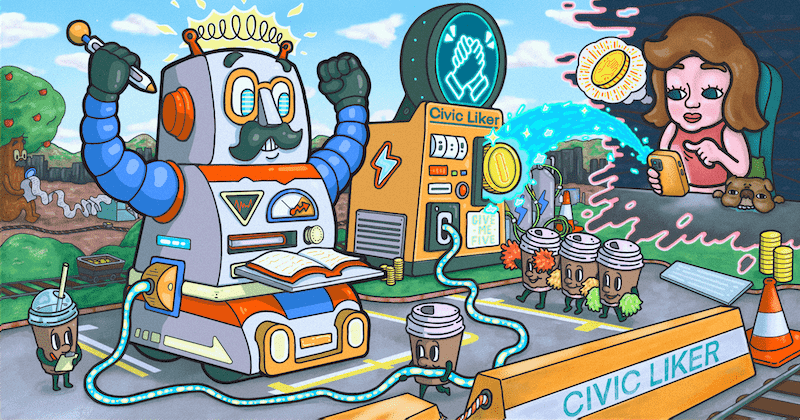 Civic Liker is a movement to reward good content and encourage openness.

You can become a Civic Liker by staking at least 5,000 LikeCoin to the “Civic Liker” node with a Liker ID tied to the staking wallet address. The node takes 100% of the stake reward to let you distribute the reward to the creators you “likes” via the LikeCoin button.

Reward creators without spending your principle

Like = reward. Every Civic Liker’s “Like” will turn to LikeCoin reward to the creators, by distributing the stake reward but not the staked LikeCoin principle. The more you stake, the more stake reward you will get, and hence the more budget you can spend for rewarding creativity.

Exampe:
Say Alice stakes 25,000 LIKE to the “Civic Liker” node. Assume that staking APR is 15%, monthly stake reward = 25,000×0.15×12 = 312.5 LIKE. Give “Likes” to distribute stake reward to the creators with your staked LikeCoin stay untouched.
You can withdraw from staking at anytime after a 21-day cool down period.

Creator’s reward consists of two parts: Civic Liker’s stake reward, and the “Creators Fund”.
Creators fund aims to support creators. The fund is distributed to the creators by “Likes” via the LikeCoin button. The more you delegate to the Civic Liker node, the greater voting power you have on the Creators Fund usage.
Free Liker’s Like can also reward a tiny amount of the Fund to creators as well.

Creators Fund is a budget granted by the LikeCoin community to support creativity. The monthly budget is roughly matched with the stake reward generated by all Civic Likers in the previous month. The usage of the fund will be reviewed regularly by the Creators Fund Committee established under proposal #23 of LikeCoin DAO.

Be the Stake-holder in LikeCoin DAO

The staked LikeCoin represents the voting power in LikeCoin DAO proposal voting. The more LikeCoin you stake, the greater voting power you get.

We believe that each dollar we spent should be used to reward openness, but not encouraging creators to lockup their content behind the paywall. Civic Liker is a way to reward creators even they open the content for free.
Join us and support a more open world.

CivicLiker movement started on 2019.01.01, readers could join a $5 monthly subscription plan and reward creators by liking. Up till 2022 Feb, Civic Liker has rewarded 50 million LikeCoin to 24,000 creators.

The Civic Liker plan moved to a Web3 version on 2022.02.21, which implemented the feature of distributing stake-reward to creators, and stopped supporting credit card payment. This is also called the “Civic Liker Web3 beta”.

LikeCoin assists authors in publishing content to the blockchain and having lifelong entitlement to their own work.