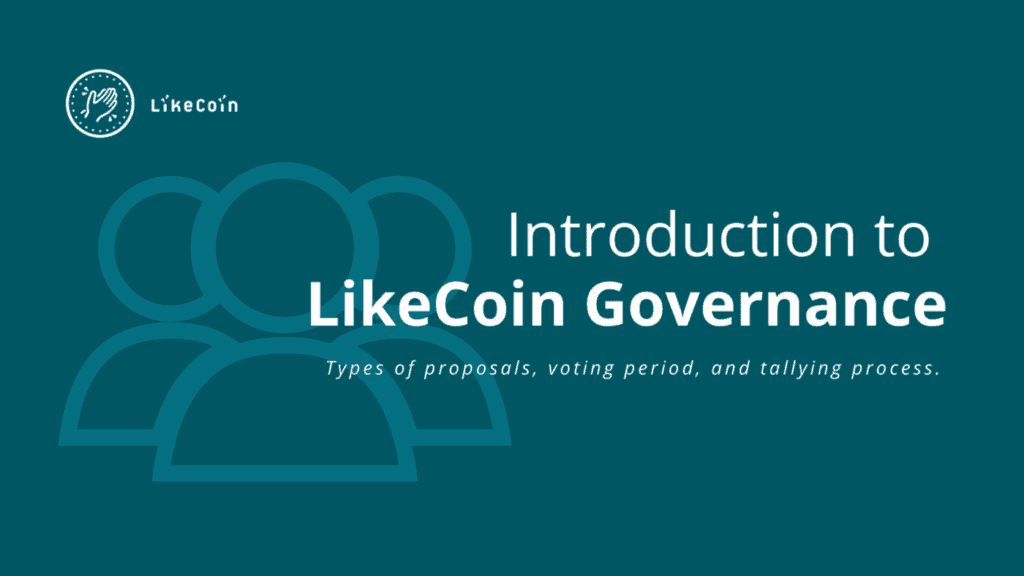 LikeCoin community governance is based on the “Liquid Democracy” principle. It is still evolving.

The validators of the Republic of Liker Land have passed 10 out of 12 proposals since the first proposal on 18 Feb 2020, almost one and a half years ago. Most of the proposed action has been implemented immediately after the proposal was passed. Text proposal such as the 4th proposal needs time for technical development and will be implemented in the upcoming FoTan LikeCoin chain upgrade. The operation and development of the governance policy have been kept moving on the right track based on democratic principles. The evolvement of the ecosystem is just at the very beginning though.

Read the details of the 1st to 12th proposals here.

A new proposal will be put on the table for the upcoming FoTan chain upgrade to get the consensus of stakeholders too. Let’s take a look at the proposal and voting procedure in this article.The Big Dipper | LikeChain Block Explorer by Forbolelikecoin.bigdipper.live

When a Liker delegates LikeCoin to a validator, not only does the Liker help validating transactions for the network and earns rewards, but the Liker also endorses the validator to raise proposals and vote on behalf of them. A Liker may also decide the amount of LikeCoin to delegate to reflect the level of endorsement, and may delegate to one or more validators. Delegation is like voting in a society under representative democracy but in a more flexible way.

Note that only delegated LikeCoin counts as voting power, even though “direct democracy” will be implemented as stated in the 4th proposal, a Liker must delegate their LikeCoin to someone in order to exercise the voting power.

There are three types of proposals:

For reference, type of proposals in the past is listed below.

Any validator can raise a proposal. In order to have a proposal to enter the voting period, 100k LikeCoin has to be deposited within 2 weeks. The deposit may come from other validators and Likers.

In case the proposal fails to get 100k LikeCoin deposit in 2-week time, the proposal will be abandoned and the deposit will be forfeit and go to the Community Pool. The usage of the pool is determined by further proposals.

By the way the deposit amount was once 1 mil LikeCoin until the 8th proposal has been passed. It is an example of Parameter Change proposal’s usage.

Once a proposal reaches 100K LikeCoin, it immediately enters the Voting period. All validators may then vote during the Voting Period. There are four options to every proposal: Yes, No, Abstain and Veto. Veto is to express a “No” so strong that the validator believes the proposal should not be proposed in the first place and should have its deposit expropriated to Community Pool.

During the voting period, if a Liker does not agree with the option picked by the validator representing them, they may transfer their delegated LikeCoin to another validator. This is another point that liquid democracy outperforms traditional representative democracy.

The proposal will be passed if the below criteria are met:

If the proposal fails to achieve quorum or gets more than 1/3 voting power as veto, then the proposal will be turned down and the deposited LikeCoin will be expropriated to the Community Pool; else the deposit will be transfer back to the owners.