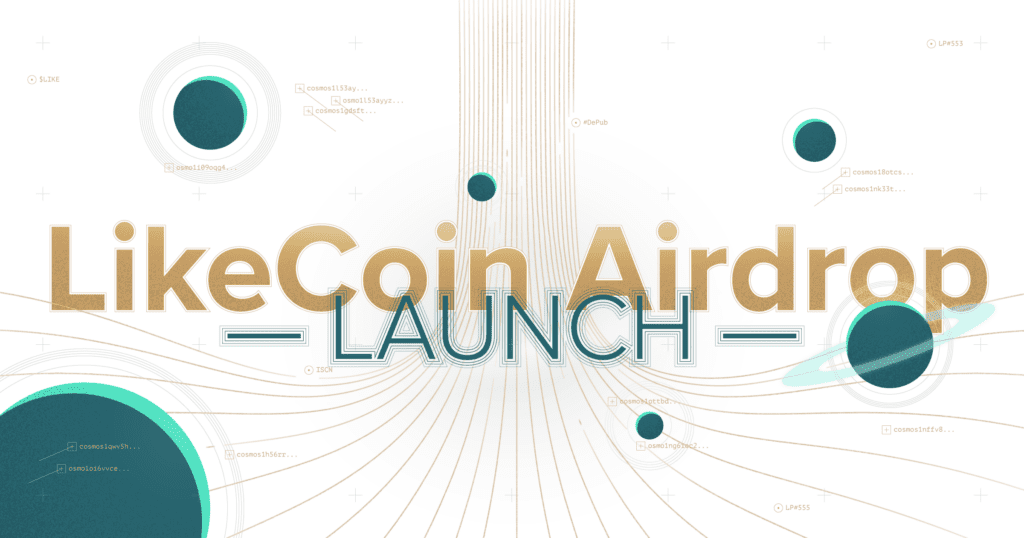 These tasks are easy and we have prepared some tips to walk you through. Welcome to inquire at LikeCoin Discord Channel #airdrop.

For all successful claimers, please also consider joining Civic Likers to support decentralized publishing and to reward the creators.

Civil Likers Web3 is now launched! You can become a Civic Liker by staking at least 5,000 LikeCoin to the “Civic Liker”’ node with a Liker ID tied to the staking wallet address. The node takes 100% of the stake reward and you may distribute the reward to the creators you “likes” via the LikeCoin button.

Planning to be a Civic Liker Web3 but not having enough LikeCoin? You can trade through various centralized or decentralized exchanges, including Osmosis Liquid, etc. For details, please refer to the trading guide. LikeCoin Validators BusinessAsMission and Code Peasant also provide over-the-counter trading services in HKD and TWD.

depub.SPACE update
Added #hashtag support and portfolio page. The user guide is ready in LikeCoin General Guide for your reference. The feedback channel #depub is available on Discord.

Fotan Upgrade
LikeCoin chain version fotan-1.2 is launched with the same content as rc-2. The major update includes performance optimization and support for automatic Cosmosvisor upgrades by default, making it easier for Validators to upgrade in the future.

Dual address prefix
Oursky and Liker Land teams are working on support for dual-prefix based on Comos SDK v0.44, that is, an address that supports the “like” prefix and is compatible with the existing address format of the cosmos prefix.

LikeCoin is operating validator nodes named “LikeCoin by Liker Land” on both Osmosis and Desmos chains. 100% of the node revenue will be used for the LikeCoin ecosystem, including:

Numbers Protocol
With the same vision on the digital content world, Number Protocol announced the partnership with LikeCoin, and will release a new application that allows photos generated with Capture App to be registered to ISCN registry directly.

Starname and LikeCoing release *like *starname community badge. Users only need to register with a Gmail account and receive the free badge for easier sharing of crypto information to receive LikeCoin.

Starling Labs
Starling Labs comes from media-tech communities like The New York Times, Adobe, and more, dedicated to photojournalism projects on Web3. They are exploring how to integrate the ISCN registration process based on their work.