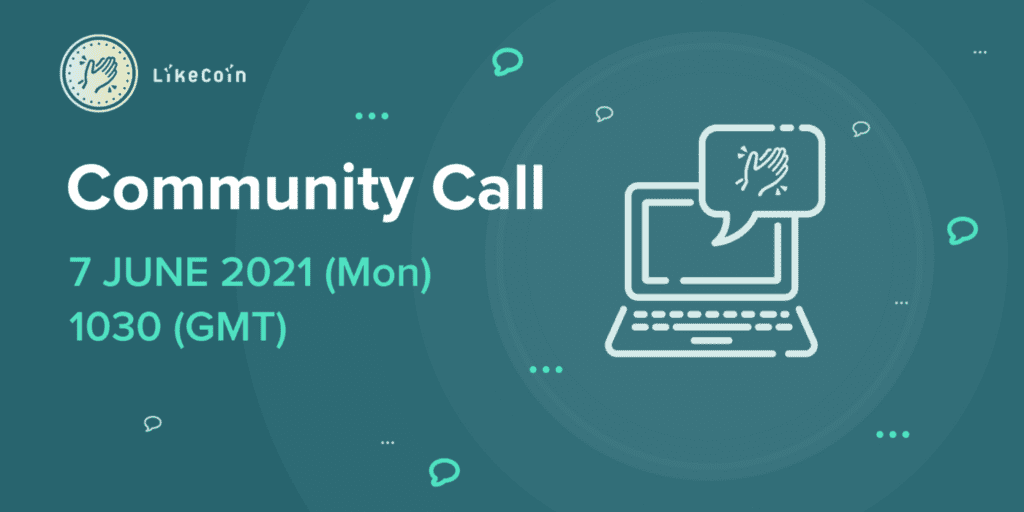 Progressive growth regarding addresses, transactions and delegated like as some of the effects of delegated like from the ecosystem fund allocation and seeing progress in migrated LikeCoin from ERC-20 to the current LikeCoin. Number of transactions surpassed one million.

Internal testing was done in May but unfortunately some bugs were found in both the procedures and software so more time is needed to work around that. The current chain software Sheung Wan does not support some of the parameters that is needed for upgrading to FoTan, technically speaking the host time and host height option are not supported very well because the SDK was in an early stage. Minor update is needed on the SDK version before the major update of Fotan occurs. Discussion will continue in Discord as the validators and community need to know more about the procedure of the upgrade, e.g. what’s the form of proposal, what they need to do. There are some form of parameters like the new chain id at the upgrade time and parameters on the ISCN modules, they are all needed to be discussed among the communities so discussion will be initiated on Discord.

We are also getting help from Daisy and Edmond also leading the effort of updating documentation, not only the LikeCoin chain but also for what you see on docs.like.co where currently is the home of where all the LikeCoin documents will be and progress is made for making it more clear for developer resources on that end, upgrade procedure will be included later.

The community passed proposal 12 which is about the community funds for validators. Guidelines for apply the ecosystem fund including: write an introduction on Matters and make sure the tag #Validator Intro has been added to the article so that everyone know your on boarding on LikeCoin, joined the Discord channel #community-funds-apply and apply for the ecosystem fund. Cut off day for fund application is on the 15th of each month, at 1200 UTC+8. The decision will be made by the 21st.

A 2nd grant meeting is conducted, reviewing some of the round 1 proposals. Two proposals: Liker.Social and LikeCoin OTC were already approved and granted.

The program launched last month in May and on it’s first round which is from May to June and calls for applications. 6 proposals submission received already and details can be founded on GitHub Pull Request https://github.com/likegrants/proposals/pulls All the memorandums signed by the team and the programs can be found on GitHub memo https://github.com/likegrants/memo/blob/main/01.md , basic information including the grade and the suggestions and comment from all the committee members. It is now in Chinese and will manage to add some English translations later.

All the proposals will be reviewed and graded by the executive committee in the work meeting and all the applicants are demanded to do a brief to introduce the project in the meeting. The meetings do not have a fixed schedule yet but it is expected to host the meeting every other week. The next meeting will be on June 9 (Wed) 9:00 pm HKT. In the coming meeting projects 5 and 6 will be discussed . Everyone is welcome to attend the meeting and join the discussion.

LikeCoin grants is a relatively small project and does not have any full-time staff, everything is under experimentation and are continuing to make adjustments throughout the around 1. Terms and rules of the programs are not totally settled yet, constructive suggestions from everyone are welcomed. The committee can be found on LikeCoin Discord grants channel. The logo design voting is also on both English and Chinese channels of Discord, cast your vote before deadline.

“Light” version of the LikeCoin Grants

There will be an “Light” version of the LikeCoin Grants, it’s a quick and easy one for any proposals demanding less than 60000 LikeCoin, fast track will be offered to simplify the application process and it’s easier for the committee to come into an agreement. The document will be updated within this week.

Schedule of the chain upgrade

OldCat (19:09) Any tentative schedule for upgrading the Taipei chain?

Chung (20:05) Public Testnet (Taipei) upgrade will be initiated in June. Practicing the Fotan chain upgrade will occur in late June or early July. If the progress is smooth then the mainnet upgrade and proposal will occur in July.

Phoebe (20:56) Last week internal testing on the upgrade and Chung wrote the upgrade documents already, waiting for debugging and to make sure the documents are available as smoothly as possible because a 50 people upgrade is coordinated.

Phoebe (21:45) LikeCoin got quite a lot of new attention since Kin’s Quartz interview went out a week ago on twitter and new business opportunities from different partners in the crypto space. It is good news for the community to know more people are aware of the mission of depublishing. Storytelling on website documentation and key visuals are also revamping, the story angle will be focusing on decentralized publishing instead of content monetization that have been talked about for the past year. There is a lot of discussion on the ISCN product related development, once it’s available it will be shared on the Discord.

Phoebe (24:58) Phoebe (24:58) Remember to claim the GTC if anyone supported LikeCoin on GitCoin matching fund previously. URL is https://gitcoin.co/quadraticlands/

Beta (23:12) is from Hong Kong and he likes to attend a lot of sports and always wants to have fair play in the community, His validator node is ObbyMo.